From HIVE
Jump to navigation Jump to search
The printable version is no longer supported and may have rendering errors. Please update your browser bookmarks and please use the default browser print function instead.

Game Attributes are custom attributes that the player can link to with triggers to help create custom settings in a map. When in a game lobby, these custom "Game Attributes" can be selected in the map's "Settings" on the right of the screen. These attributes also work with Game Variants to essentially allow a map's creator to set various types of playable game modes, possible hero choices for players, and anything else they can think of that they want the player to be able to choose prior to the game starting.

To access this window from the editor, go to "Map > Game Attributes...."

The following will be broken down into the two types of attributes you can modify: Game and Player. 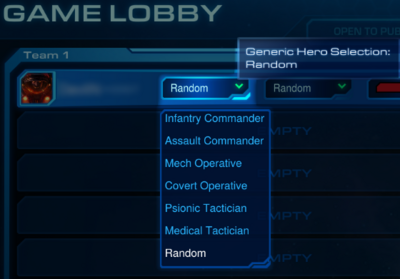 A screenshot of a custom "Player" attribute in a map lobby.

"Player" attributes are customizable attributes that can be selected in the game lobby. These are supposed affect each player differently, and would commonly be used to choose a hero.

Click the "Add" button on the bottom left to make a new attribute. With your new "Untitled Attribute" selected, go to the "General" tab. Make sure the button next to "Player" is pressed to make the new attribute a "Player" attribute.

This is the tab that allows you to name and describe your "Player" attribute.

In this screenshot, the attribute is used to select a hero in the lobby. Now whenever someone plays this map, they can see the "Generic Hero Selection" dropdown and select whichever hero they would like to play as. Specific values (or "heroes") are set under the "Values" tab. Like the "Game" attribute, this tab allows you to modify who gets to set this "Player" attribute.

In this screenshot, there are no "Game" attributes linked to the values. It will apply to all players and can be seen by all players, but can only be set by the player it affects. 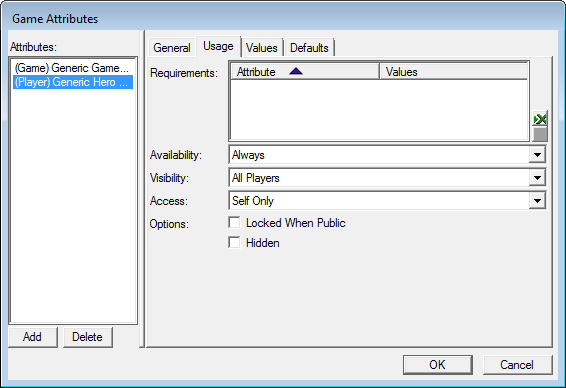 This tab allows you to set the various options that can be chosen by this "Player" attribute.

In this screenshot, there are seven hero choices available. Theoretically choosing one in the game lobby will start the player with that hero, while selecting "Random" will start the player off with a randomly selected hero. Again, these values can be linked to triggers for these choices to take effect. 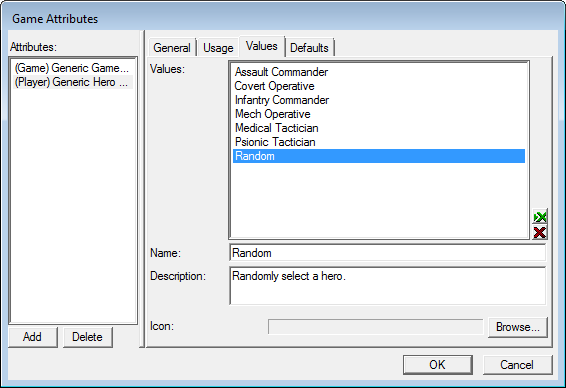 This tab allows you to set the default "Player" attribute value for each player. You can also lock and unlock these values if you want specific players to be stuck on a certain game mode.

In this screenshot, all players automatically have the "Random" hero selected, but are able to switch to the others if they wanted. 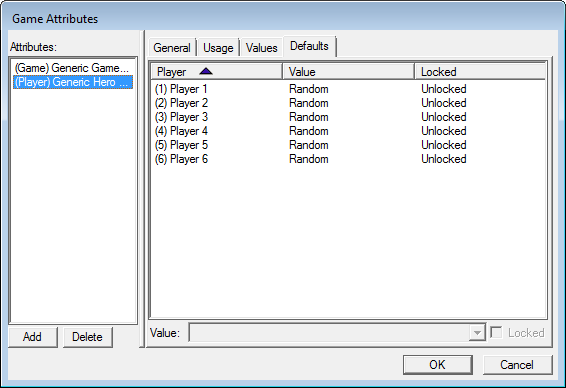 If you want to make any use of your custom attributes, you need to detect them in triggers. That is done via Attribute Game Value or Attribute Player Value functions (they both return Attribute Value variable type). This function simply takes the desired attribute as parameter (in the GUI list of attributes, there are all standart atributes, including obsolete attributes, like Teams[2 Teams] for backwards compatibility, don't use those). This value can then be compared with simple IF or SWITCH to provide with the effect this attribute. Example trigger:

OneTwo talks about Game Attributes at around 6:38. <youtube>aQp3irTx25o</youtube>