From HIVE
(Redirected from Mover)
Jump to navigation Jump to search

The missile mover system uses a video editor metaphor. The map maker can chain up to 5 motion phases one after the other, transitioning between them via blends, as necessary. It is also possible to add extra motion overlays on top of the phases to further customize their look, similar to how one can overlay video processing effects on a video stream.

Missiles are typically used to configure missile-based attacks, but the underlying motion can also be used to drive a reaper's body when it jumps or a spine crawler's tentacle when it attacks.

At the core of each motion phase is a driver. There are four types:

The guidance driver supports the canonical guided missile. It causes the missile to chase the target, regardless of where it moves. Most missiles that are not simple ballistic projectiles have a guided driver phase somewhere.

Individually limit how fast the missile can turn in the three traditional rotational axes used by pilots (yaw, pitch, and roll). This enables the user to configure a missile like a fighter plane, which rolls faster than it can pitch and pitches faster than it can yaw.

Yaw, pitch, and roll are represented as degrees per second. This field also supports the special "MAX" value, which means that the missile can turn at the maximum possible rate per missile simulation on that axis. This value is critical for enabling missiles to always hit their targets when they get close enough.

The ballistic driver enables the user to create the typical catapult-like projectiles. They are configured by horizontal speed or Flight Time, but not both.

This is the generic field used by all drivers, but uniquely interpreted by the ballistic driver to mean constant horizontal velocity. This enables the user to treat the ballistic driver like a standard guided missile for purpose of balance. It also makes it impossible to create degenerate combinations of target distances, launch angles and launch speeds.

Controls the time it takes for the projectile to reach the target, regardless of distance. Enables the user to schedule ballistic projectile arrival and also makes it impossible to create degenerate ballistic missile configurations.

The parabola driver is best used for jumping types of behavior, like with the Reaper (the unit for which it was developed). It allows precise control over movement speed throughout the parabola without causing the parabolic arc to be deformed in any way.

When enabled, ensures that the missile is always parallel to the ground, which enables a unit like the Reaper to always appear upright throughout its flight path. If this flag is not set, the parabola controls the forward vector of the missile to give it the expected upward and downward pitch as the missile travels up and down its flight arc (like the nose of a football points first upward then downward as it travels).

Specifies how much loft (i.e. additional height) the mover creates over the higher of either the launch or destination points. This is a variator, so can be a base plus a random range, in order to provide visual variance.

This is an array of numbers that specify the lengths of 4 parabola "hotspots".

It is often best to have a Before Apex value that is longer than the After Apex value, if one wants to use deceleration to make the missile appear to "loft" realistically.

Causes the missile to move along an arbitrary linear path. While seemingly of limited use, this is actually the most flexible and powerful driver from a visual punch perspective. When strung together with blends and varied across groups of simultaneously fired missiles, throw drivers can create stunningly unique visual patterns.

The local coordinates of the throw. They do not need to be normalized.

Enables the user to configure throw variance along the yaw plane, as a deflection with respect to the core throw axis.

In other words, the user can specify a throw arc with or without biases towards the right or left side, and he can prevent missiles from firing out in a gap within that arc, so that they do not appear to fly through the fuselage of the attacking craft. These numbers also make it easier to create: A) starfish-type burst patterns and B) exaggerated "whip-strike" attacks that cause the missile to flare out in a particular direction before striking the target.

Like Throw Band Yaw, but for pitch. When all four yaw and pitch min values are used, it means that missiles come out in a square ring, rather than a across the entire area of the square. As mentioned above, this is useful for creating certain kinds of flare-out missile patterns.

A vector in local coordinate space that configures an arbitrary facing when using the Vectored rotation type.

Motion Overlays manipulate how objects reach their target. Most often, they are used to change the path of missiles, mid-flight. This can be done in a variety of ways.

Axis. A vector in local coordinates that controls the axis around which the overlay motion is applied. For Wave overlays, this controls the direction of the sine wave. For Orbit and Revolver overlays, it controls the axis of revolution. In most cases, this will either be 0,-1,0 (forward) or 0,1,0 (backwards). However, it is possible to create unusual and skewed overlays by varying it. (For instance, creating a lateral revolution axis for an orbit creates a vertical cycloid flight pattern.)

Orbit makes your missile spin in circles while flying toward its target. 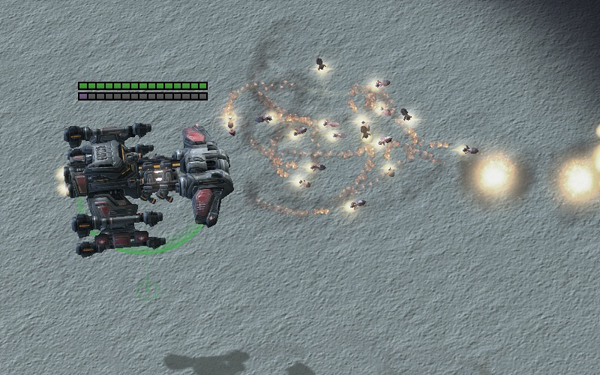 Revolver makes your missile revolve slightly from the casting point before heading toward its target. 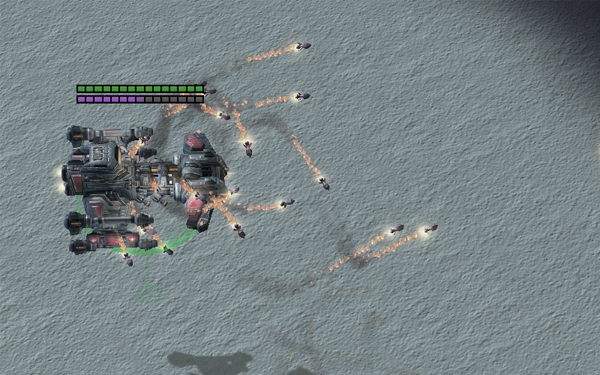 Wave makes your missile zig-zag on its way to the target point. 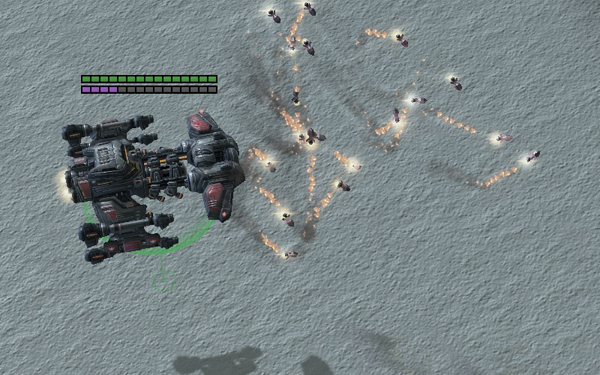 When you specify an outro in data, you have to specify a Blend At value and a Stop At value. If these two values are the same, then the missile will instantly switch over to the next phase once the specified outro distance is reached. If the two values are different, then the motion phases will blend between the two values. While a blend is active, two phases (the current and the next) run in parallel and their results are blended together. Generally speaking, blends result in smoother movement, particularly when the motion drivers on the blending phases are different. Blends are almost always necessary to avoid glitches.

As with many other objects in StarCraft II, missiles have both a synchronous game part and an asynchronous actor part. Missiles simulate their game state 32 times per second, which is double the rate of a normal unit. As with everything else, they draw when there is enough time to do so, which means they can draw anywhere from many times between each game loop (if the game is running smoothly) to not at all for long periods (in dire frame rate situations). The game part of the missile simulates twice per game loop and then pushes the data over to the actor side of the missile, which interpolates between the data it has on hand. In dire frame rate situations, it is possible for the actor side to fall behind, in which case the user sees missiles jump.

Because of the game/actor split, missiles actually have two flight paths: a game path and an actor path. The game path travels from the origin point of the attacker to the origin point of the target. The actor path travels from the launch attach point to the impact attach point. A process called adaption occurs internally to ensure that missile the user sees on the screen tracks the basic game path, while still moving directly between launch and impact attach points.

Also of note is the fact that motion overlays are synchronous. This enables them to be much more dramatic, without causing jerky movement. They actually scale down the underlying driver movement such that the real missile velocity (with overlays included) matches the speed specified by the user.

Every motion phase has a number of generic fields that apply to two or more phase driver types, along with an array of fields that customize specific drivers. It also has a small array for varying the scale of the motion overlays present during that phase.

The speed the missile starts the phase with. The user typically configures this value on the first phase, since the missile's actual speed, in most cases, automatically carries over to the next phase while it is flight. (Speed does not currently transfer into ballistic phases, nor does it transfer out of throw phases where the rotation of the missile is not pointing in the direction of the throw.)

This field is uniquely interpreted as constant horizontal speed by the ballistic driver.

Governs how a missile turns towards the target and whether it cares about the notion of up maintained by human fighter pilots. Can be three values:

Tunes how a missile reacts when its target moves in ways that might cause the missile to appear to behave oddly:

Controls how a missile tests whether it is close enough to its target to be considered "arrived". Can be three values:

Controls how blending occurs between overlapping phases. Can be three values:

A critical field that controls when and how the phase ends. It has 4 different values associated with it:

Configures the rotation of the visual part of the missile when it launches, so that its apparent rotation doesn't need to match the game launch rotation.

Configures the rotation of the missile while it travels, so that its apparent rotation doesn't necessarily relate to its actual travel path.

Causes a phase to terminate after a certain amount of time has elapsed. If the phase has a blend, it starts the blend and causes the end of the blend to be as far away from the blend start as it would normally be (i.e. if a blend and stop are set at 5 and 7, then a timeout that causes the blend to start at 2 will also cause the stop to occur at 4).

An array of up to two scale values. (The system does not support more, because the effect of individual overlays become hard to discern if there are too many.) Scale controls how big an overlay appears. For a wave overlay, scale control the wave's amplitude, while for orbit and revolver overlays, it controls the revolution radius.