Cameras are used for custom in-game views. You interact with them via triggers, but create them directly from within GalaxyEdit. 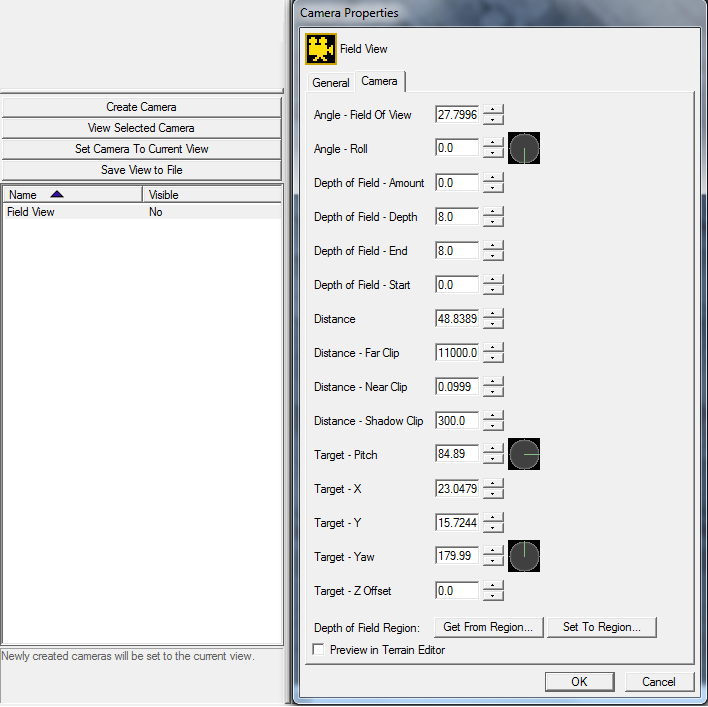 The window to the left is the editor Camera Layer's menu bar. As you can see, any newly created camera will be set to the current view in the editor.

If you've moved your screen since you've created the camera, and prefer this angle/distance for the camera, simply select the camera you want to edit in the list and press the button "Set Camera To Current View".

If you are using too many cameras to your like and you see them all over the screen, there is a solution to hide them to your view: select the cameras you want to hide, right-click, and uncheck "Show Camera". Or you can also press Shift + C to hide the whole Camera layer when editing another layer.

When you enter a Camera's properties, you will see the window situated to the right of the screenshot shown just above (when editing values, it is recommended to check "Preview in Terrain Editor"):

Here's a description of each field found in there:

Of course, simply creating a Camera will get you nowhere: you have to assign it to players. There are multiple other things you can do with them as well, so here is a description of the most used Camera-related triggers: