Game Variants are necessary settings in your map that allow it to be published. From the Game Variants, you can modify the player properties, set up teams, and even modify the lobby delay timer.

To access this window from the editor, go to "Map > Game Variants...."

In the bottom right of the window that popped up, uncheck "Use Default Variants." If you want to make a melee map, the "Default Variants" cleverly created various modes for you to choose from based on the amount of "Users" set in the "Player Properties." Since this is most likely a custom map, however, you will want to keep that unchecked.

To add a variant, simply click "Add" in the bottom right. Conversely you can delete a variant by clicking "Delete." Yes, really! Right-click the new "Untitled Variant" and choose "Default."

Under the "General" tab, you can set the name of your variant as well as a brief description. It seems like the description isn't actually seen anywhere in game, so writing something there is optional.

Under the "Game Type" tab, you can categorize your map for the Battle.net map list, and you set the "mode" associated with this variant. 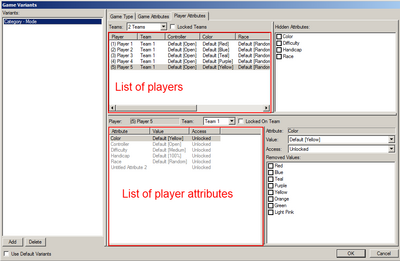 Under the "Attributes" tab, you can finally modify the details regarding this variant.

(Team setting used to be here, now it was moved to the Player Attributes tab)

At the very top, you choose:

The attribute modification table bottom-right allows you to set default values for each attribute, lock them and/or remove certain values. (For example you can remove Computer from controllers, if your map doesn't have AI)

Often players have issues publishing maps due to Game Variant conflicts. This is because they have set up options in the "Player Properties" as well as Game Variants. Unfortunately in order to publish your map and have Game Variants set, you can only set the player "Control" in the Player Properties. The rest has to be done through the Game Variants. But beware! Game variants are inactive in Test Document mode, so for any options to work with map test (for example playing the correct race), you need to set them in Player properties, and them remove them before publishing your map.