Unlike the Data Editor which determines the general behavior of the game elements, the triggers dictate the events and actions that occur at specific points within a Starcraft II map. By setting an appropriate event, some acquirable conditions, and a few actions, you can easily make anything change or happen.

The first thing you need to know about the trigger editor, is how to open the window. There are a couple ways to do this.

Now that the trigger window is open, you'll see quite a few areas.

The picture on the right could be what your trigger window may look like, depending on how far into a project you are. 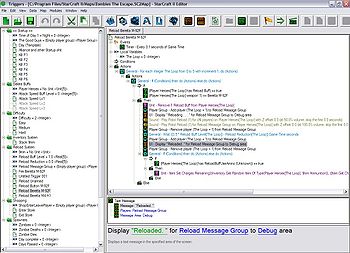 There are four main parts to a trigger:

Triggers are run in the given order, Events -> Conditions -> Actions. An event must start the trigger, it's conditions must pass, and then the actions can take place.